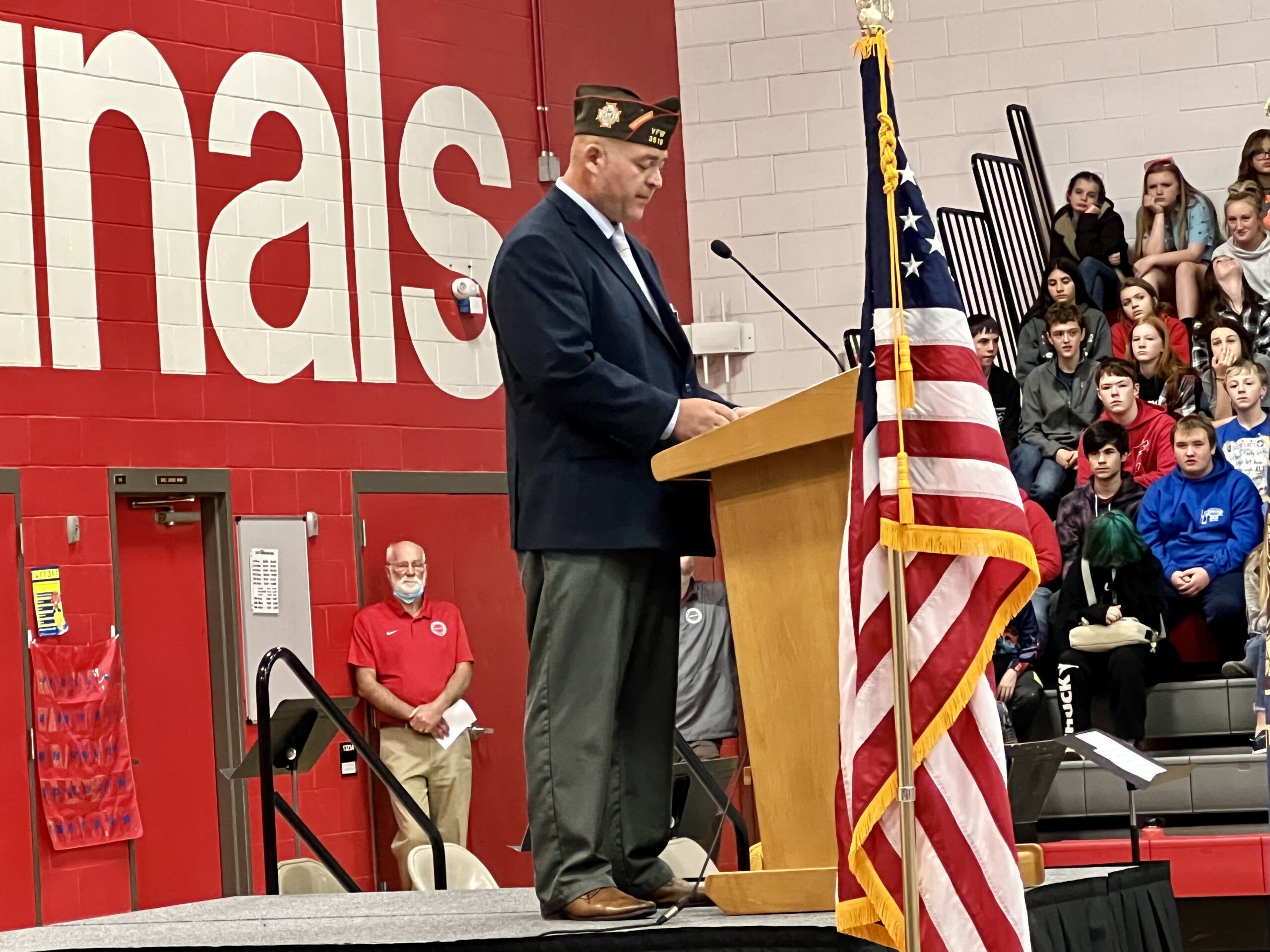 State VFW Commander Michael Braman gave the he key address. There are 126 VFW posts across the State of Iowa, and over 13,000 members he represents. Commander Braman Joined the Army March 1993, with the 10th Mountain Light Infantry Division. He ETS’d in 2002 and joined the Iowa Army National Guard. He retired from the Iowa Army National Guard in 2013 as a Sergeant First Class.

Highlights of Braman’s military career was when deployed to Bosnia in 1997-98
with the 10th Mountain Division, his unit was tasked to pull security at the mass grave sites, while the UN uncovered the mass grave sites so they could charge individuals for War Crimes. The summer of 1999 he trained over 1,900 cadets at West Point Academy in Marksmanship where he was the NCOIC (Non-Commissioned Officer in Charge) of the Zero Range. Also, he was the NCOIC of the Stix lanes in which he trained cadets to react to indirect and direct fire. He deployed to Afghanistan in 2001, 2004 where he led a squad of Infantry Soldiers.

During those two deployments he conducted over 400
combat missions. He also was there during the first presidential election in Afghanistan. In January of 2009 his unit was sent to Washington DC to pull Security for President Obama first presidential Inauguration. In the summer of 2008-2011 he was put on orders to help assist the Iowa Army National Guard Recruiting and Retention Team. In which he oversaw events across the state such as Iowa State Fair Display, RAGBRAI, Boys State, Iowa High School Football Camps, and Honor Guard for the Iowa Speed Way. From 20011-2013 Michael was the Training NCO that was responsible for training all soldiers who enlisted in the Western part of the state to get ready for Basic Training and Advanced Individual Training. Since Joining the VFW 5 years ago Michael has served as VFW Post 3519 Chaplain, Service Officer, Judge Advocate, Sr. Vice Commander. When Michael was Sr. Vice Commander at his VFW Post in Knoxville and the 5th District, the post and district received All-American Status (Highest award given to a post and district). He has served as the Jr. Vice, and Sr. Vice Commander for the State of Iowa VFW. Also, he was the founder for the Ruck for Vets Event at his VFW Post 3519 in Knoxville. This event was to raise money for the VFW’s relief fund (assist veterans who are in NEED). Also, for the past 3 years he has been the Post Development and Revitalization Chairman for the State. Michael took the lead to open the Durrant Post, and currently is trying to open a post in Altoona. He also has traveled across the state several times talking with posts and giving them ideas on how to revitalize their posts and being more proactive in their communities. This past year he has ran table displays, talked with state legislatures and the Governor on veterans’ issues. He has attended veteran memorials and funerals. He has given speeches in front of Senator Joni Ernst and Governor Reynolds about Veteran Suicide at the State Capital. Also, he has sat on a national legislative meeting in which he has talked to Both Senators and all Congressman/woman on veterans’ issues. He will be heading to Washington D.C in February to lobby on more veterans’ issues that the VFW is trying to pass in congress. Commander Braman’s Commander Project is Homeless Veterans this year. Michael is running for VFW National Administration Council Member in 2023. Which if elected he will set on the council who makes the decisions nationally for the VFW.